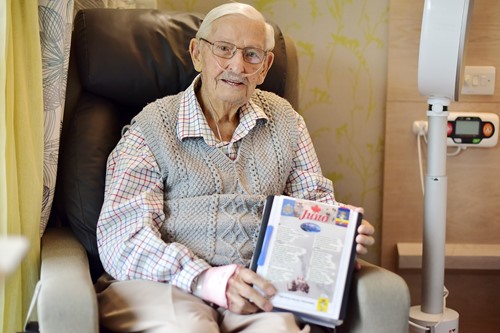 94 year old Ron Stevens has spent years putting together the story of his life including his time in the war, wanting to share his story with others.

Ron signed up for an apprenticeship in the army at the age of 14.

“My headteacher was asking what I was going to do when I left school and he suggested I sat my army entrance exam.”

Ron joined the Army Service Corps as an apprentice vehicle mechanic, it was a career that took him all over the world. He started off working in Jersey but was evacuated due to the Second World War, being poste to Aldershot and then Chepstow.

“It was when the Germans started to occupy France and the British government demilitarised Jersey so we had to get out. The smoke was getting too close.”

“A lot of the vehicles which were coming ashore had been shot at. Vehicles from the British, American and Canadian troops were all coming back needing to be brought back into service.”

Ron stayed in France until the war came to an end when he went to work in Belgium, Holland and then Germany, still repairing vehicles for the army.

By then he had met Esme – and the pair agreed to marry when the war ended.

When Ron returned home after breaking his leg after being knocked off his bike by a German lorry, the pair married.

“I had spent five days in hospital with plaster from my toe to my thigh, then I came home on a fortnight’s leave and in May 1947 we got married in Compton Martin. I was still in plaster when we got wed, but I managed ok.”

After spending further time in hospital Ron and Esme travelled across the UK with his work, spending time in Liverpool and then in Salisbury where they got married quarters.

But it was not long until Ron was off again and within two years he was sent to Hong Kong, leaving Esme behind. It was during this time that he received a Marconi gram telling him his daughter Cynthia had been born.

It was three years later, after serving time in Malaya to support British troops in the Malayan War, that he returned home to meet his daughter for the first time.

The couple went on to have two more children – Margaret and Valerie. Sadly Esme died when Valerie was just six weeks-old. Ron’s mother came to live with him to support the family and after leaving the army, he continued to work, enjoying careers with a civil engineering company and Bristol City Council.

Ron, a grandfather of five, eventually retired from his job as a caretaker for South Gloucestershire Council at the age of 73.

It was when he retired that he started writing about his life with information, pictures and other artefacts from his military career have been passed on to the Imperial War Museum.

In 2015 Ron was awarded the prestigious Legion d'Honneur by the French government for the work he did.

“I am one of the last Normandy veterans in Bristol. There are only a handful of us in the city and a dozen or so across the south west. I was honoured to be recognised for the work that I and so many of my comrades played in the liberation of France in the Second World War.”

His life story comes in three sections – the war, his family and post war.

Speaking about his experience of our Inpatient Unit, Ron said

“They are truly wonderful here, and are always interested to sit and listen to my stories. It is a wonderful, calm place to sit and think about my life and look again at the book. I wanted to leave a legacy for my family and they have helped me greatly in writing the book. I’ve had a long life and interesting life, that’s’ why there is so much to write about.”